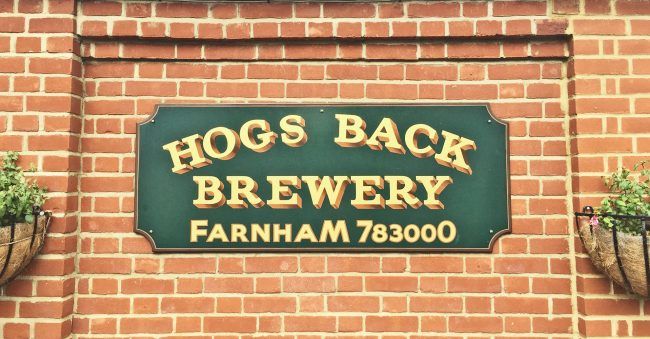 Hogs Back Brewery, as many of you will know, is a family owned and hugely successful brewery in Tongham village. It is the largest independent brewer in Surrey, an area historically known for its great quality hops.

We were invited along to take a tour of the brewery and find out more about the making of Surrey’s award winning beers. The process of brewing starts in a field 3 miles away from the Hogs Back Brewery, at the Hampton Estate, who have been growing hops for centuries.

Archive literature describes the areas’ hops as “famous for their excellent quality” (Clinch, 1909) in reference to the once abundant Farnham White Bine, which was the most highly regarded and one of the most expensive hops across the country, favoured for its “most delicate flavour” (Bradley, 1729). 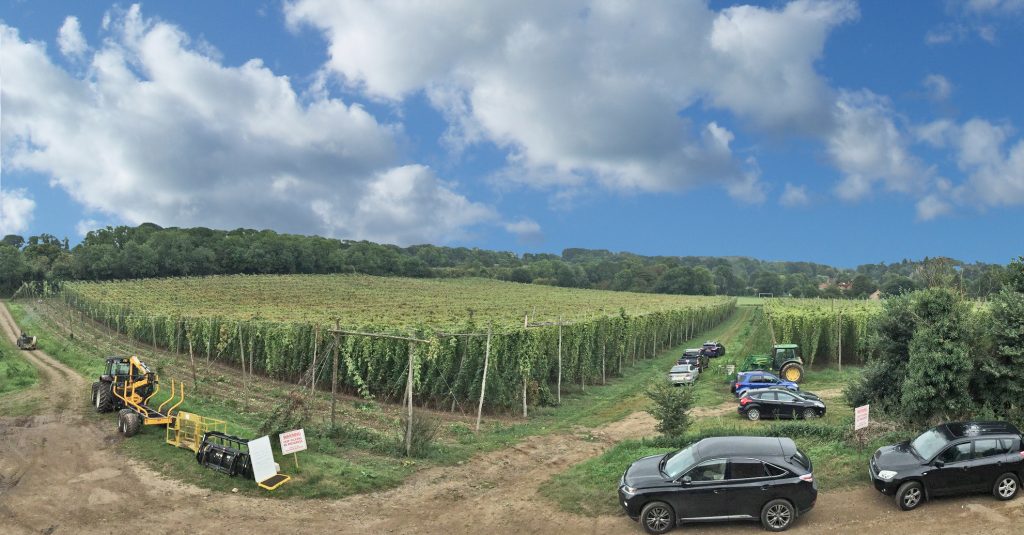 The Hampton Estate boasts 14 acres of Fuggles hops, popular for its bittering and aromatic qualities. It holds herbal characteristics similar to US hops Amaris, and woody notes found in UK First Gold hops.

We were lucky enough to visit the site at harvesting season (the first 2 weeks in September when the hops have reached full bloom at 16ft high) and see how they are picked and harvested. It’s a process which seemingly hasn’t changed since its origins and with the help of willing students the whole crop is collected, dried and packaged in only 2 weeks! 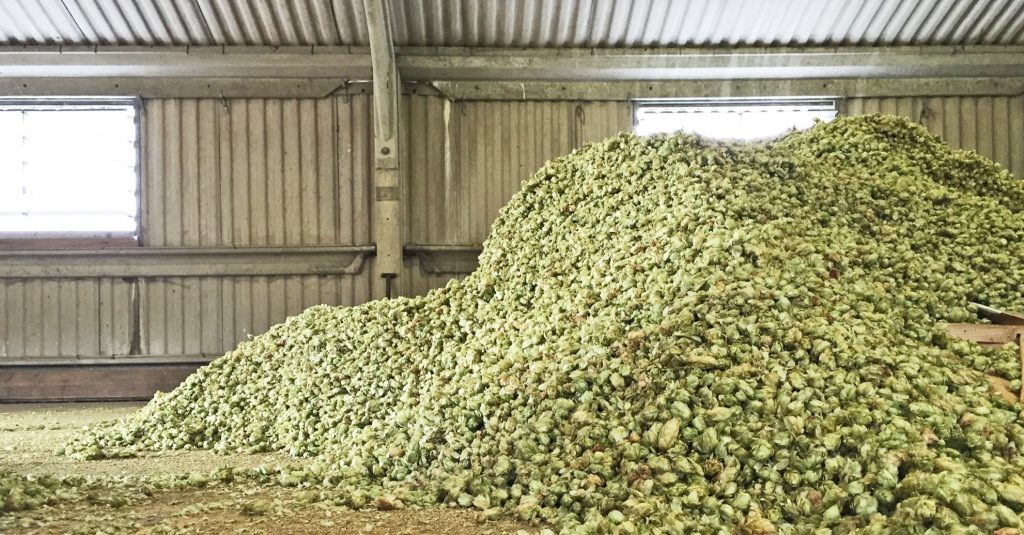 Once picked, a large diesel burner then dries the hops which helps to store and lock in the essential oils. After they have cooled they are pressed into sacks weighing 85kg, which carry the emblem of a church bell. This is a symbol of the local area in which the hops are grown and has been used for many years, see below.

It’s great to see such locality in the industry, which, for the most part has expanded and modernised its processes; from overseas ingredient sourcing, to automated machinery. This is not to say that the standards of beer cannot be maintained with such technological advancements, but, it loses a sense of romance for the industry and process, a romance which is very much alive at the Hogs Back Brewery.

Head brewer Miles Chesterman, took us for a tour of the brewery which is located in an 18th century farm building, originally housing cattle such as hogs (hence the name) and other produce like wheat. In the years since opening in 1992, the brewery has experienced much expansion (the logistics of placing such vast brewing vessels in an old building was rather an entertaining story to say the least).

You can take a guided tour and find out the intricacies of the procedure yourself. Book you own tour of Hogs Back Brewery today. 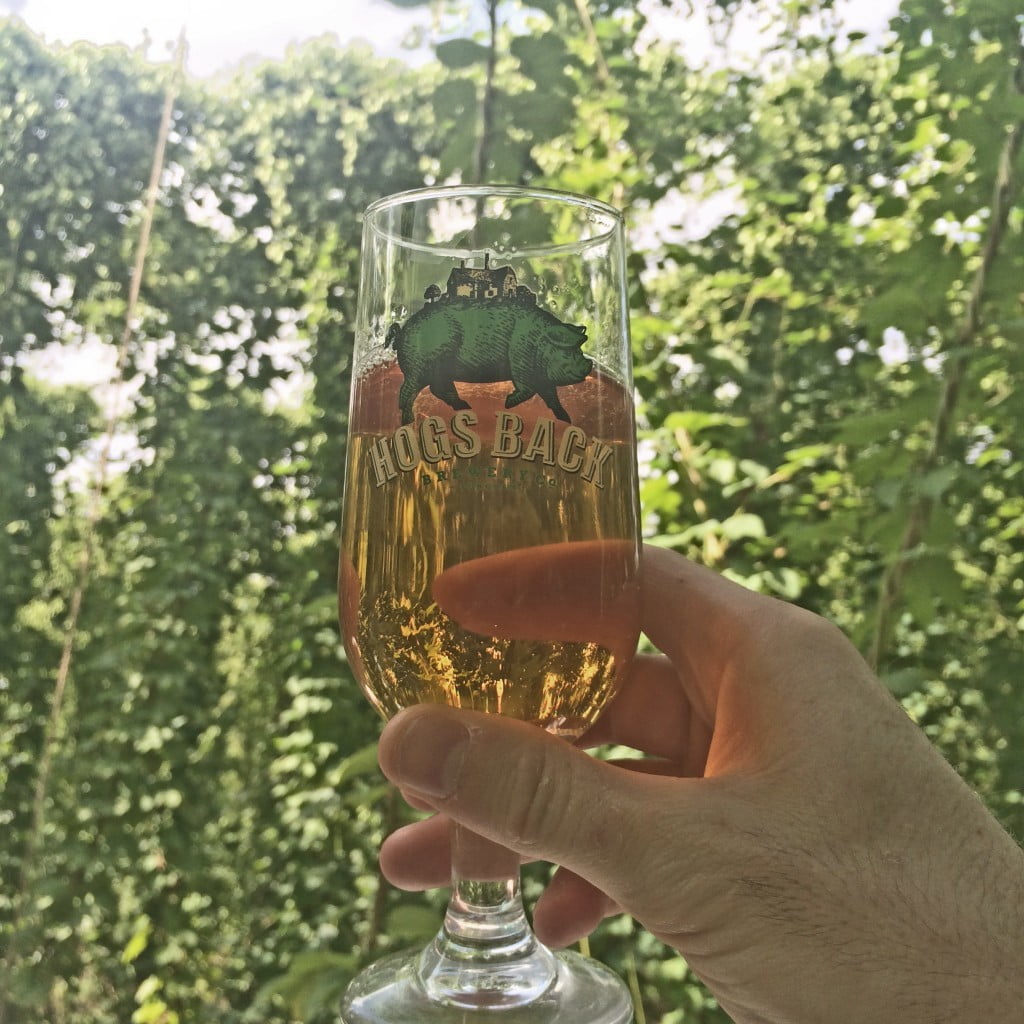 Chairman Rupert Thompson took us across the road to a 3-acre plot where he has successfully re-planted the highly regarded Farnham White Bine, as well as Fuggles and Cascade hops. The reasoning behind this venture was to invest in re-learning the old methods, and to aid in innovation and more sustainable brewing.At present Hogs Back source 70{9b37e9a1aab23c06b42e3240cdc4692d2428c1bb52b76d04ce8272a38d1d0e6e} of their hops from their own garden or the local hop gardens at the Hampton Estates.

Half way down one of the lanes in the hop garden we were greeted by a banquet table with jugs of Tea, Hogstar and Surrey Nirvana beer and a selection of local produce from pork pies, scotch eggs, local cheeses and fresh bread to soak up the beer. It was a rather surreal experience but one which topped off the visit perfectly. 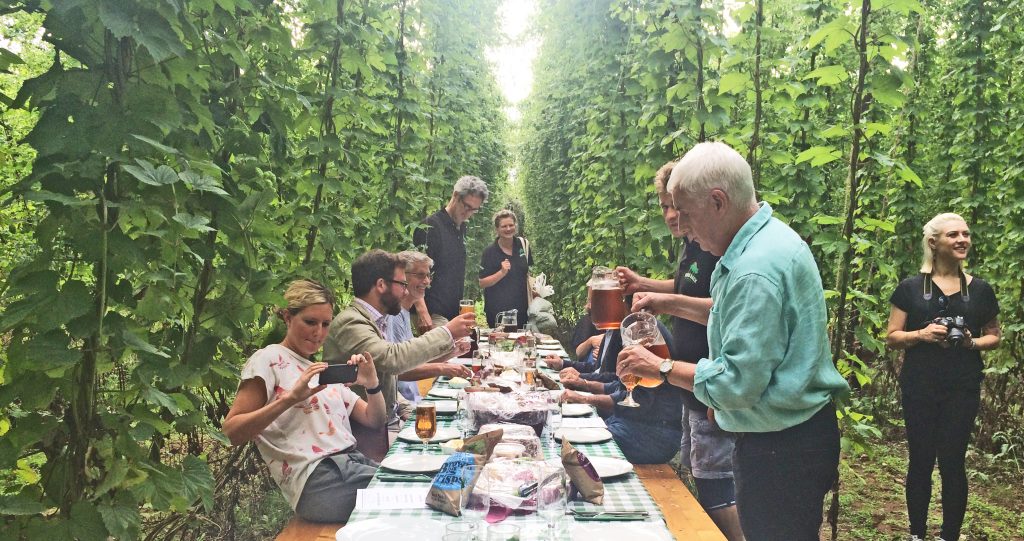 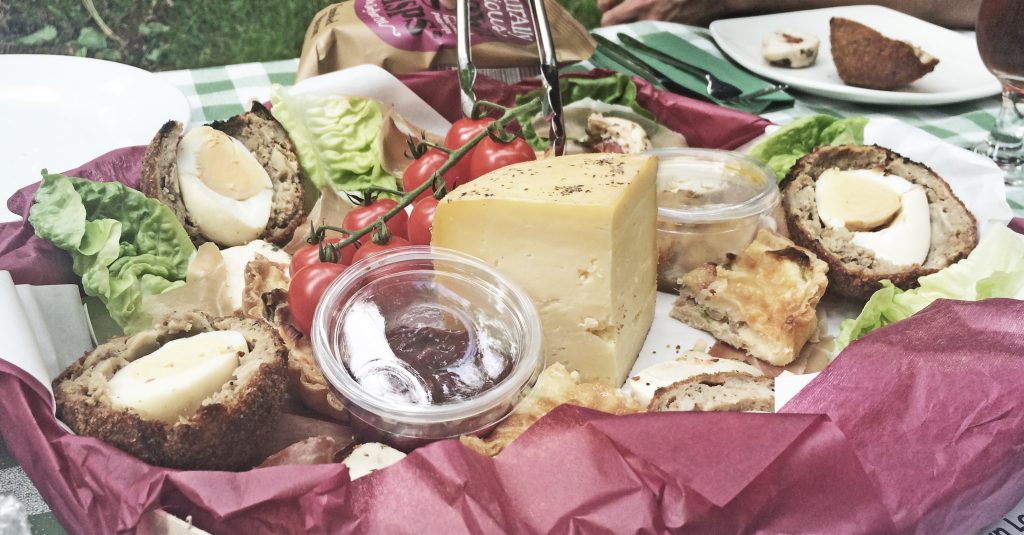 We have stocked Hogs Back beers since 2005 and are proud to support our local producers in raising awareness by serving the perfect pint here at The Duke of Cambridge and at our 6 sister pubs. Come in and try for yourself sometime!

If you would like find out more about Hogs Back Brewery and take a tour yourself, head on over to their website and book a date. You can also find many of their seasonal beers in the brew shop on site.

« The Story of Mozzo Coffee
A Visit To Chateau Carbonneau »