The dynamic duo behind Tilford Brewery, Mark Collins and Paul Griffiths, have been hard at work over the past six months since our last update.

We last caught up with Mark and Paul in February but since then they have been busy developing new brews, building upon their brand and logo as well as winning awards and collaborating on new partnered projects… the boys have certainly had their hands full as their business continues to go from strength to strength.

Beer of the Year 2017, Farnham Beerex

As first-timers at Farnham’s Beerex, Mark and Paul were very proud to win the much sought after Beer of the Year at the annual event for their Rushmoor Ripper English bitter. This was a tough competition and strong contenders included Saltaire’s Triple Chocolate Stout, Titanic’s Plum Porter, Padstow’s May Day and Swannay’s Orkney Blast. 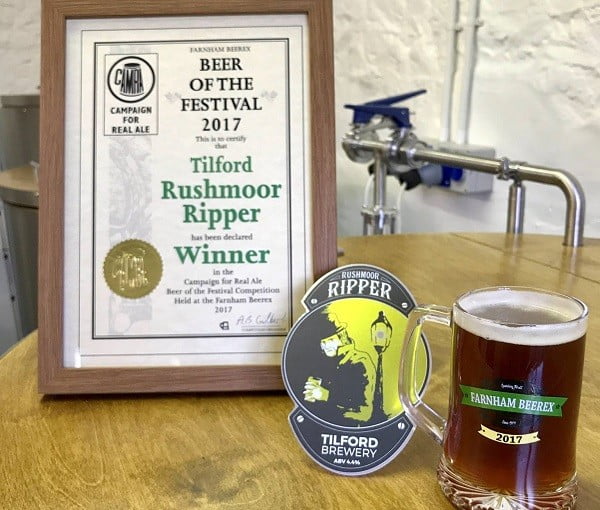 The boys are currently collaborating with Farnham Hoppers, who as a local community, elect to grow hops for a community beer, cultivating it with lots of TLC and at the end of the season, they harvest the hop blossom for a local brewer. This is where Tilford Brewery come into the picture; Mark will be the brewer transforming the hops into a glorious green beer.

Watch this space for the finished community beer which is set to be called Primadonna which is likely to be brewed in early September.

Tilford Brewery will be selling their Primadonna beer (made using the Farnham Hoppers’s hops), Rushmoor Ripper and Tilford Wit, throughout the weekend and offering support in the organisation and setup of the event.

For more details on Tankards for Tuckwell, visit www.pth.org.uk

Coming Soon…Beer of the Week

Given that Tilford Brewery is located next door to The Duke, there obviously needs to be a few treats and benefits that our customers get to enjoy… That’s why we’re delighted that we will soon have a permanent tap presence on the bar for Tilford Brewery, along with a blackboard to keep our beer-loving customers abreast of the latest news and ‘what’s brewing’.

Adding to their already highly-sought after ales, Tilford Brewery’s latest brew is a 5.5{5cfe739c4fdb0a74dbda4c10f2b316ff9213d2b4b184cd66ba24f4489e1117c3} Grapefruit IPA, which will be debuted over this August Bank Holiday weekend. This is a lighter ale and an ideal accompaniment to any dish with a bit of a spicy kick!

« Meet the team
Autumn; The time of harvest and gathering together »